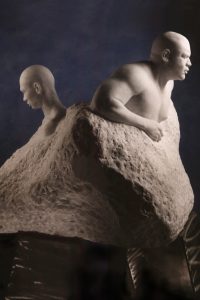 “1989: Emerging Continents”, reflects a turbulent period in our history.

A portrait of a young oriental man expresses compassion and solidarity for victims of the Tiananmen Square upraising and an oppressive government in China. An African, emerging from a marble block clutching a “stone” represents liberation and hope.

Inspired by the repressive action of the Chinese government in Tiananmen Square. This brutal silencing of a student congregation became the spark that was to initiate this political statement in marble.

On November 9th 1989, the fall of the Berlin wall again inspired ideas and images of revolution, freedom, and victory, the triumph of a people over a repressive government. These events brought me to visualize one of the dichotomies of political reality; revolution is treason for those who are being disposed, your definition depends solely on your point of view. This developed the image of surrender and victory beside each other, freedom and repression back to back.

Then political upheaval again rocked the world, the apartheid government in South Africa released Nelson Mandela, and with this news came the image of a native African rising in triumph from the restrictions of a political power, emerging from the bonds of stone. His raised hand clutches a piece of the Berlin Wall, representing those political injustices that he survives, and at his back, the Chinese student, head bowed in submission sinking into the depths of repression.

The work was created in 1990 in marble thanks to a friend and patron Mr. T Field to whom I owe my most sincere gratitude for his trust and his belief in my work.